In relation to our Give It a Go Campaign "Save the Hedgehogs", here is a short story by Sophie Walters.

“Mummy, mummy! Look what we found!” Megan shouted, racing into the living room. Camryn looked up from her book just in time for the five year old to jump onto her lap, and tackle her into a hug.

“Hey, sweetie! How was the park?” Camryn laughed, positioning Megan so her knees weren’t digging into Camryn’s ribs.

“Me and mummy found a baby and we need you to take care of it because you’re the doctor!” Megan said excitedly, bouncing up and down on Camryn’s lap. Camryn looked at her, concerned.

“Well sweetie, I’m not a people doctor, I’m an animal doctor. So if this baby is really poorly we should take it to the people hospital…” Camryn replied slowly.

“But the baby is a animal!” Megan jumped down onto the floor and grabbed her mother's hand. "Come on, mummy!!" Camryn got up and let herself be dragged out of the living room and into the family's kitchen, where Jaya and Ruby were sitting at the kitchen table. On the table sat an open shoe box filled with newspaper, that looked like it had something wriggling around inside it. Megan pointed at it, still tugging on Camryn’s hand.

“See, mummy, we found a baby!” She said. Camryn looked over at Jaya for an explanation.

“We were walking around the little woodland area of the park, just past where they held the bonfire last night, when we heard this little guy making noises in the bushes.” Jaya answered, gesturing to the box in front of her. Camryn looked over, and inside the shoe box was a small hedgehog. It was sitting in the corner of the box, but Camryn could see one of its front paws had been cut, and the little creature lay in the box, shaking and whining in fear. Camryn gasped.

“Oh the poor thing!” She whispered.

“Yeah, the little guy looks pretty shaken up. Mum said we should bring him back here, because you’d know how to help it.” Ruby piped up.

“Okay, first thing’s first, I’m going to need some water, aloe vera, a carrot, and some salt. We need to clean the wound on his paw, and then once he’s calmed down a bit I want to take him to the practice for a proper check up.” Camryn said, while gently placing a hand inside the shoe box. The hedgehog reluctantly leaned forward and sniffed Camryn’s hand.

Jaya got up and turned on the kettle. Once the water inside had boiled, Ruby passed her the salt, and she poured both it and the water into a bowl. After a few minutes the salt had completely dissolved, and the water cooled down. They brought the mixture over to Camryn, who had let the hedgehog sniff her hand until he was comfortable with her touching him, and she began to clean the wound. With the aloe vera used as a dressing, Camryn managed to patch up the paw with a makeshift bandage, while the hedgehog nibbled on a piece of carrot as a distraction from the pain.

“Okay, that should do it!” Camryn said after the hedgehog finished his carrot piece.

“I wonder what hurt him in the first place.” Ruby pondered.

“Did you say you found him near where last night’s bonfire was held?” Camryn asked.

“Yeah, like pretty much right by it.” Ruby said. Camryn shook her head.

“I thought so. The wound on this little guy’s paw wasn’t a cut, it was a burn.” She said gravely. “It’s likely he saw the bonfire last night, mistook it for shelter, and then tried to climb in while it was still lit.”

“So he just walked onto an open flame??” Ruby gasped, looking back at the hedgehog with worry.

“It definitely looks that way, hun.” Camryn replied. “It happens to a lot of hedgehogs this time of year. This one was lucky, others don’t usually realise until it’s too late.” Jaya, Camryn, and Ruby looked at each other solemnly.

“What’re we gonna name it?” Megan spoke up suddenly, unaware of the conversation happening around her.

“Well… What do you think we should name him, sweetie?” Jaya asked. Megan thought for a moment before answering.

“Hamish the super duper hedgehog hero!” She proclaimed, waving her arms about in the air as she spoke. Jaya laughed.

“What book did that come out of?” She teased, picking Megan up and planting a quick kiss on her cheek.

“Oh, it’s um, one of mine.” Ruby said sheepishly. “Megan and I have been reading a few of the books I used to love back in primary school. Hamish the hedgehog is kind of her favourite.”

“Well I think it’s perfect.” Camryn smiled. “Welcome to the family, Hamish. Now let’s get you properly checked out so you can go home.”

Three weeks later, the family stood by the bush they had first met Hamish. Camryn gently placed the shoe box onto the ground, and let a healthy Hamish crawl out and back into the bushes.

“Bye Hamish, we’ll miss you!” Jaya called softly, as he ran off.

“I wish he didn’t have to go.” Megan pouted. Camryn bent down and gave her a hug.

“I know, sweetheart, but the flat isn’t the best place for Hamish to live. He needs to be out here, with all of his friends.” She said.

“And I’m sure he has a family waiting for him, too.” Ruby added.

“Can we come back and visit him sometimes?” Megan asked, her face buried in Camryn’s shoulder.

“Of course we can, sweetie.” Jaya said.

“Right, one last wave to Hamish, and then we can go and push you on the swings.” Camryn pulled away from the hug. Megan perked up at the mention of swings.

“Can I go down the slide too??” She asked excitedly. Camryn laughed and nodded, and with one final wave to Hamish, Megan began tearing across the field towards the playground, screaming with laughter as she went.

In relation to our Give It a Go Campaign "Save the Hedgehogs", writer Lottie Pound created this poster about hedgehogs and what to be aware of on November 5th, Bonfire Night. 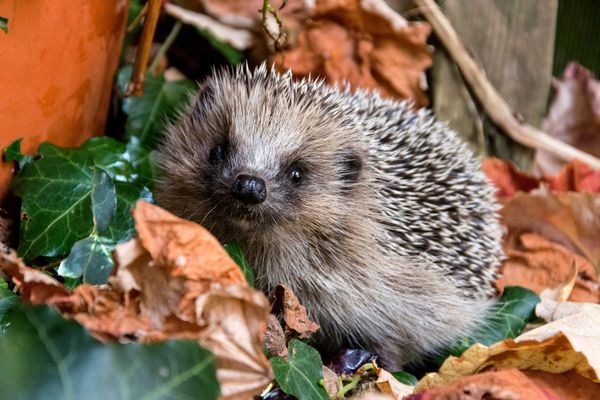 In relation to our Give It a Go Campaign "Save the Hedgehogs", writer Laura Slominski wrote a special poem for November 5th, Bonfire Night.