International Mother Language Day is observed on the 21st of February each year. It was founded by UNESCO in 1999, inspired by the 1952 language movement in Bangladesh (then East Pakistan). Often its annual theme focuses on the importance of mother tongue for inclusion in education, but others have included its relation to science, e.g., indigenous knowledge contained in mother languages such as Sami, and its relation to cyberspace. From the perspective of education, in 2019, 40% of children globally faced significant language barriers in schools. However, tests in Kenya, Haiti, Liberia, and Niger suggested that leading earlier primary classes in students' first language led to an impressive increase in their ability to read and write. International studies such as the EFA Global Monitoring Report suggest that this practice also supports second language acquisition later on.

Schools, universities, and student associations often use the day to share and celebrate different mother languages within a community. Being half-Hungarian I feel blessed that there are many more people who are bicultural in this town and the university. As a reflection on the benefits of multiculturalism generally, I collected testimonies from students and Hub committee members who are bilingual or cultural, which can be read below:

Marietta Mosto: 'My name is Marietta Mosto, and I speak Spanish, Italian and English. I grew up in a house where my family spoke mostly Spanish and Quechua, went to an Italian school, then moved to England when I was 16. When I was younger, I did not realise how lucky I am to have been brought up in such a diverse environment and now have the chance to speak and understand so many beautiful languages. This knowledge facilitates job, travelling and social opportunities, as well as making me more aware and appreciative of the countries where these languages are spoken, and their culture'.

Gina Starkie: 'Not bilingual, but I'm trying to learn a form of my mother tongue: Jamaican patois! It's a dialect of the English language that my grandmother and distant family speak on my mother's side of the family. I've felt pretty detached from my culture since my gran moved to the UK long before my mum was born, but learning little pieces here and there makes me feel more connected to it again. It's a long process, but it's nice to find out more about my roots!'

Georgiana Lopata: 'Being bilingual gives me so much freedom to engage with the world and explore my identity. I grew up speaking Romanian, so learning English broadened my horizons and allowed me not only to consume more diverse content in the media but to bond with people from different backgrounds. In most English-speaking environments, I find that international people tend to stick together and create stronger friendships amongst themselves and I think it's wonderful that we can connect through our differences and open-mindedly learn about and appreciate each other's cultures. There's a theory that bilingual people often feel like different individuals in different languages, and although my Romanian self holds the essence of my culture and my roots, and sits at the core of who I am, my English self has always felt like it has more freedom to explore the world and speak out on issues I'm passionate about, like equality and inclusivity in our society.'

Elenna McNamara: 'I grew up in England learning Lithuanian alongside English due to my mum being Lithuanian and my dad being Irish. Having a mix of two countries and cultures has always been important to my identity since childhood. Learning Lithuanian helped me feel connected to my mum's side of the family, who all live in Lithuania and don't speak English. I've also been able to read books in both languages, which I find to be a great advantage as an English Literature student, reading, writing and speaking Lithuanian makes me feel very close to my family and culture. One day I hope to write a book about my grandmother's life during the Soviet occupation, writing it in both English and Lithuanian to make it more accessible to a wider audience'.

Thank you very much for reading, hope this was insightful for you in some way. 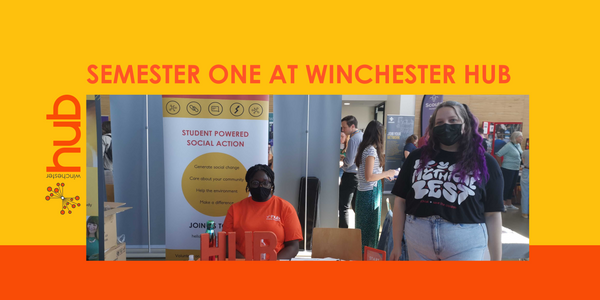 It’s the end of semester one, and what a semester it’s been! I wanted to start this week’s blog post by looking at everything the committee and staff of Winchester